I am so tired of the sass. From both kids, but mainly an unnamed red-head.

Sass and attitude have taken over our house. The unnamed red-head pouts, whines, cries and carries on when things don't go her way. The unnamed freckle-face also goes through this but to a lesser degree.

It's the defiant attitude that gets me the most. "Unnamed red-head, please take your plate to the kitchen," I say. She turns her head away with a "harrumph!"
This weekend for Easter I said I wanted one good family picture. Marshall had to carry unnamed red-head outside to the chosen picture location kicking and screaming. Her reason for the tantrum? "I just don't want a picture with all of you."
So my blood boils. I holler at her. She cries more. I holler more. She cries more. Marshall explains to me that this is counter-productive, which it is, but when I have to tell my 4-year-old multiple times in one weekend that she's repeatedly hurt my feelings, I feel justified. 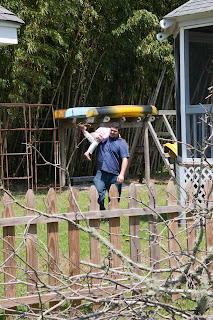 So I told unnamed red-head that the attitude had to stay at her grandparents' house when we left. It seems to have snuck back in the car with us. I'll save that battle for another day.
By Allison at 1:13 PM