I couldn't be more disappointed in Mac after this weekend.
He voluntarily had his picture taken with a clown. 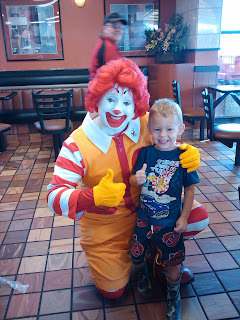 When we walked into this particular McDonald's, a man walking out said, "You're just in time to see Ronald McDonald."
Seriously - I saw spots. I felt my knees go weak.

I hid behind Marshall. I shoved my costume-scared child in front of me to catch the attention of said clown and hid.

I just wanted to get behind Marshall, get our lunch, eat and get out. I thought maybe the offender was packing up to leave, but Noooo - he was there the ENTIRE TIME. I kept my head down, ate quickly and kept telling the kids, "Eat! Eat! Let's go!"

Now, Mr. McDonald was very nice. He gave every child stickers and a little coloring book with a two-sided crayon. They kids were quite happy. SB stayed slightly clear, but allowed him to give her the sticker and prize bag. But otherwise she remained shy.

Mac on the other hand was thrilled. He was giving Ronald McDonald High-Fives, he wanted to follow him around. He was in high heaven.

I've never been so disappointed in one of my children before. Seriously. It pained me when he wanted a picture with Ronald McDonald. I had to close my eyes and hope my picture was in frame.

So, with a serious case of the heebee-jeebees, I shake my head in shame. My son likes clowns.
By Allison at 8:08 AM