Why I'm Glad I Have a Boy

If you know me, you know I'm girly. I like pink and sparkles and used to draw tiny hearts around boys names. (Okay, so I did that yesterday with my hubby's name. Give me a break!)

And I will tell anyone willing to listen that I have no idea what I'm doing with a little boy. We don't have little boys in my family. We marry boys, not raise them. I had never even changed a boy diaper before we brought Mac home.

I had never played cars or guns or rough housed. I had tea parties. I played Barbies. Boys were a completely different breed of person to me.

So when we brought Mac home I felt like I was looking at an alien. It was a learning process (and still is!). Thankfully for me, he has a big sister and I could still dress him up in tutus (he wanted them! I promise!). I had to resist the urge to paint his nails and get his ears pierced, though. Daddy would not like that.

But I am so glad I have a little boy.
For one, it balances me out. Tea parties are fun, but only for so long. Then the giant scary dinosaur comes and smashes things to bits, leaving little red-haired girls crying in their wake and me laughing at the fun of it all (until Red notices and I have to scold the boy). Mac has introduced me to a whole new side of fun I didn't know existed.
A son does not have the mood swings a daughter has. Yes, he gets angry and upset, but he doesn't brood. He doesn't stew over an injustice the way girls do. Offer the kid a sucker or toy and all is forgiven and he's happy as a clam again. Mac really is the happiest child I know. He has a smile for everybody and is such a joy!
He is also my lovey-dovey child. SB is very sweet, but she's not a cuddler. Mac is. In the rare moments he is quiet and still he cuddles. And Oh, how he cuddles. It's amazing. He curls up tiny as can be and puts his head on your chest and makes you want to melt.
He gives "best" hugs. Ask him when you see him for a Best Hug and then brace yourself. He will jump at you and squeeze you with all his might. And it's the most wonderful feeling in the world.
There is no fear in my son. Unless you're talking about bugs - he freaks out over bugs - but otherwise, no fear. I would be scared to death to have someone toss me 12 feet high in a swimming pool and let me crash down - not Mac. At three years old, he loves it. Rock climbing? Going under water? Meeting people? No fear at all. It's just not in him (unless you're an ant. then stay away).
Mac keeps me on my toes. He thinks of things girls just don't think of. Who needs to color on a piece of paper when you have an entire wall as a canvas? And didn't I know that my phone could do that? And who would have ever thought that a stick could be a balance beam, a weapon, a walking stick AND a dog leash - all at the same time.

Before Mac came home, I could not have ever imagined my life with a boy. It was so foreign to me. It's not an adoption thing, it's just a girl/boy thing. But now - now I have the most precious son. I am so thankful to God for granting me such a wonderful gift. I only hope I can do right by him! 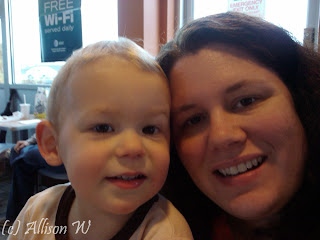