My daughter has a fear of costumed people. Particularly if they have a costume head.

I think she's scared they will be decapitated. I don't know. She knows it's just a person in a costume, like Halloween. She knows they won't hurt her and Mommy/Daddy are right there. But still, since she was a baby, she had not liked characters with heads.
I can relate since I have a terrible fear of clowns.

It's a long-standing tradition for little Clemson fans to have their picture taken with the Clemson Tiger, and I was thrilled when we encountered him at a parade when SB and Mac were little. Sadly, SB was not thrilled. I don't know if you can see it, but the look on her face says, "Don't get any closer, dude." 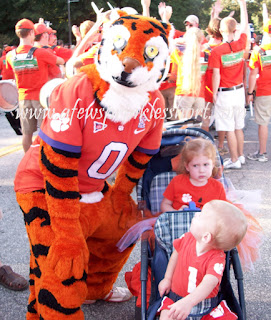 Then one of her little friends had a birthday party at a local themed bouncy house place. And they had they monkey mascot dancing around. All the other kids danced around too. Except for Red, who went running, in tears, in the other direction.

So now that we're in the final stages of Disney prep, I keep reminding SB that many of the characters are costumed people - with heads.
I don't know what her reaction will be, and she has been assured many times over that she does not have to approach the headed characters if she does not want to. I think she will allow her picture to be taken if Daddy or I are with her, but I'm not sure.

I think she keep seeing those big floppy heads just popping right off the people. Who can blame her? They are kinda creepy.