I'm sharing this blog, though I'm sharing it via another blog. Confusing, sorry!
I'm sharing Beth's Blog, called Humble Ambitions. Beth's blog is about life as an American wife, a Christian and I wanna-be farmer.
She wrote something that was featured on Kristen's Blog Rage Against the Minivan. Kristen was a Hero of mine a while back, if you recall.
Her article (for lack of a better word) is entitled What I Want You to Know: Being Fat & Hairy (PCOS)). It's linked and I'll copy it below for you as well.
I'm sharing this because PCOS is something not many people know about, yet it affects millions of women across the world. While I have never received a formal diagnosis of PCOS, my doctor has alluded that I have many of the symptoms. Since it's something with no cure and it's not life threatening (just makes you have extra weight and hair and causes fertility issues), I've never pushed for formality with it.
I identify a lot with what Beth says here, so for me, I'll just add, "Ditto." And Kudos to you, Beth, for being brave enough to write it out!
Anywho - check out the article and then browse over at Beth's blog and Kristen's blog as well.

My name is Beth.  I'm 35 years old, and i weighed 270 pounds at my last weigh-in.  That's twelve pounds less than my highest weight.

When i was a teenager, i started noticing more hair than normal on my face and chest, but i didn't think too much about it; neither did my parents.  When i was 19, i went for my first "ladies exam," and was diagnosed with Polycystic Ovarian Syndrome (PCOS).  The doctor told me to eat lots of vegetables to lose weight and that if i "didn't get it taken care of," i might not be able to have children.  That wasn't very helpful.  The next doctor i went to blew off the previous diagnosis, and so i decided not to worry.  But during college and after i got married, the previous "more hair than normal" became really obvious.  So much so that i resorted to shaving my face and arms daily.

PCOS is a mysterious disease, named for one of its symptoms, not its cause, which is largely unknown.  It's other symptoms include hirsutism (masculine hair growth on a female body - that's my definition) and slowed metabolism resulting in weight gain and extreme difficulty losing weight, and infertility.  The only definitive remedy for relief from some of the symptoms of PCOS is reportedly "to lose weight."  If you are able to lose the weight, it may or may not make a difference. There's no relief from the hair growth other than your normal hair removal remedies.

Lots of people seem to have mental stereotypes about fat people that they think are justified and don't feel badly about.  Stereotypes like, "fat equals lazy," or "fat equals stupid."  And you know what?  Sometimes those stereotypes prove true.  Sometimes.  But they're stereotypes, just like everything else.

Here's what i want people to remember when they look at a fat person:  you don't know their circumstances, and you haven't fought their fight.  First, there are many conditions, such as PCOS or thyroid disease, that can make weight loss, or even healthy weight maintenance extremely difficult.  Throw in a little depression or just established habits from childhood, and you have the makings of a nearly impossible fight.
Also, fat people know they're fat.  Newsflash.  There are all kinds of psychological factors behind obesity.  What this person needs most from you is to be accepted and loved, not confronted about their appearance.
Here's what i want you to know about me:

I'm not lazy.  Fat doesn't equal lazy, and thin doesn't equal hard-working, any more than white equals rich or black equals stupid.  I work hard.  I work out every day.  I might be slower than you, but then you'd be slow too if you were carrying 140 extra pounds on your back.

Fat also doesn't necessarily equal overeater.  It might.  But it doesn't have to.  I spot check my calorie intake, and it usually rings in between 1000 and 1500 calories per day.

Hairy doesn't equal masculine.  Not by a long shot.  I am feminine, with feminine hormones and feminine feelings and feminine thoughts and feminine longings.  I like to feel sexy, just like you do.
Facing you with my five o'clock shadow, because i didn't have time shave in the middle of the day, takes enormous courage.

Getting advice about weight loss from someone who just fought their big twenty-pound fight to get back down to 120 pounds is insulting.  I know your heart is in the right place, but you don't realize how many times i've lost 20 pounds.  I'm two of you before you lost weight.  There's more to this for me.
Jokes about women with beards and hairy backs sting.  But i don't show it because i don't have the courage face the looks i'll get if i explain why those jokes are hurtful.

Please stop a bit and think before you ask a 35 year old woman why she hasn't had children yet.  She probably has a story, and it's probably very tender.

I don't recognize myself in the mirror.  I still feel like the 19 year-old girl, getting ready for marriage, with a nice figure and a healthy weight and smooth skin.  Please treat me like her.  That's who i am inside this deceitful facade.  Please get to know me.  My appearance does not define me.

Thanks for reading and understanding.  More of my story is here. 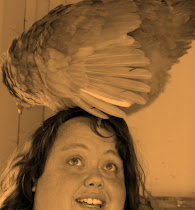 Thanks and God Bless today!
By Allison at 7:57 AM

I think it was very courageous for Beth to share her PCOS story! I also have PCOS and it is life threatening or at the very least life altering when you consider the risk factors for heart disease, type II diabetes and other risks associated with obesity. I wish they would find a cure for PCOS other than "losing weight" because as Beth mentions, it's difficult to lose weight with PCOS even with daily exercise and watching caloric intake. Again, I'm proud of Beth for sharing her story!

Thanks for posting this; I did read it on Kristen's blog, too. I have PCOS, every single symptom except for alopecia. And I'm quirky about it... I'm always hearing the docs say, "I've never encountered that before" when I describe something. Yay for me. I also want to mention that having PCOS also seriously increases your risk for heart disease and diabetes, as well as certain female cancers. I, myself, am already battling high triglycerides and though my blood sugars are currently still normal, the insulin resistance at the heart of PCOS still scares me about the future if I can't find some way to lose weight. Also, PCOSers often have amenorrhea which can lead to uterine cancers if left untreated. PCOS affects - or can affect - the whole body, not just those pieces involved with fertility and weight. Just had to add my two cents!

Allison, thank you for linking to my blog and for the props. I've been amazed at how many women have been identifying with what i wrote.