Getting to Know You

Recently I was chatting with a good friend of mine and I asked what one had to do to become "well known." Not necessarily famous, but attained a status of which their name was known in certain circles without a ton of explanation.

My friend thought this was an incredibly deep question - deeper than I thought - and said I should post this to Facebook and see what results came about. So I did.

Her response, however, was by far my favorite.

"...but i think it is through being transparent ...meaning having people know you for who you really are," she said. I loved it because I do try to live my life, at least here, in transparency.

Here are the other responses I received. Most were insightful, some were a little sad. But I thought them too interesting to not share with the blog-o-sphere where everybody is out to become "someone," myself included.


"When you become too popular on fb to have a personal profile and are requested to move to a page so that you can have fans." - from W. M.
"For common people like us, word of mouth." - M. B.
"...get on Oprah's book list?" - J. B.
"Unfortunately, people remember most the people who impact the Seven Deadly Sins: Envy, if you're better than them at anything; Wrath, if they hate you; Sloth, if you make them do something they don't want to do; Lust, if they want you; Pride, if you compete against them; Gluttony, if you are their meal ticket; and Greed if you have something they want. Sadly the Seven Saintly Virtues don't have as much of an effect. That's why "nice guys finish last."" - K. B.
"I would think to be well known for something, you must do it the best or the most uniquely." - S. W.
"Allison, most of the "well-known," AKA, "celebrities" we think about are the products of enormous promotion projects. Think Backstreet Boys, Britney Spears, yes, Nora Roberts, etc." - J. W.
I am most impressed with all the responses I received.
The response about being known for our sins is terrible and terribly true. Think about OJ Simpson. Yes, he was famous before everything happened. But he then received a air of notoriety that still hangs around him to this day. Monica Lewinsky, as well, might have been "well known" among her peers for being an aide at the White House, I am sure it's considered quite the honor. But it was her dishonor that led to her being famous and still parodied to this day.
I also did like S. W.'s response about doing something best or most uniquely. I think we all attempt to carve our own little niche in the world. Something that makes us unique and note-worthy. While I know many, many good mothers, Michelle Duggar of TLC fame is famous for having birthed nineteen children. It's something like a sport for that family (Whom I adore, by the way, I love their show and their solid values.)
J. W.'s response, however, seemed to hit the nail on the head. We've all heard of sports legends like Michael Jordan and Wayne Gretzky (even my spell check had his last name in there!). Yeah, Wayne is NOT the only guy to have played professional hockey - but he is the most well known because of some very strategic and advantageous marketing on his behalf. We all know who these people are because they are thrust into our daily lives on a constant basis.
So what is the point of all this? I haven't got a clue, I just found it interesting. We all seek to be "well known." I don't know if I personally seek to be "famous" (which to me means being in the likes of Madonna or Julia Roberts), but known within certain demographics. 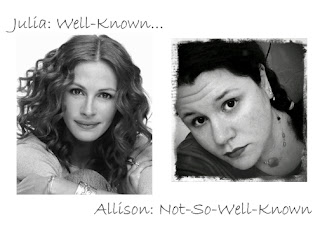 I would love it if one day I was "well known" even a little among the throngs of female Christian readers in the world - or heck, even South Carolina. Or maybe if I were one day a public speaker (which I would love to do! I'm hire-able!) and someone actually knew who I was before I got on the stage. That would mean success in becoming "well known" in my world.
Maybe one day, until then I'll keep dreaming.
By Allison at 7:41 AM

Usually, my dreams of grandeur are entirely overshadowed by my introverted desire for a private life. But even if i were a complete extrovert, and i became famous, Lord let me not become well known or famous for something stupid.

If my name is ever a recognizable one, i pray to God that it is for something honorable so that i can put the glory back on God.