A week ago my niece had her second brain surgery in less than 2 years.

Madison has an optic glioma tumor and while it was not cancerous, it was dangerous.

In October 2010, Madison had about 75% of the tumor removed. While scared, she said she knew God would bring her through the surgery - and He did! We were all so relieved.

Then came the word that a second surgery would be needed. There were many tears and prayers over this second surgery. Why did she have to go through this again? She is only 15 years old - wasn't one brain surgery enough?
But again, Madison knew her God would pull her through. She told me on the phone a little before her surgery that she knew God had a purpose for her going through this. She knew God would pull her through so she could give him the glory. And while she did break down in tears sometimes, she has held up and been one of the strongest individuals I know - teen or adult.

So last Thursday she endured another 8 hour surgery that might have taken her eyesight. Friday morning she woke up and could recognize everyone in the room. She could see! And despite a row of staples in her head, she was in great spirits and recovered in amazing time. So amazing, in fact, her surgeon sent her home Sunday.

All I can do is shake my head and say, "Thank you, Lord." I don't know another teenager who would have been so brave. I don't know another adult who would have been so brave. Madison's faith not only kept her positive and led to a quick recovery - but it also showed her non-believing Uncle that God has a hand in every life. He said afterward he could see how God was working in her life. 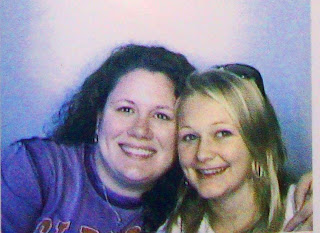 I have loved Madison from the day she was born. I have prayed for that child for 15 years. And I am so awed and proud of the strong Christian girl she has become. I hope she carries her faith and her testimony everywhere she goes...
By Allison at 9:38 AM