My Son is Amazing

I can only imagine what would have happened to my son had he not been adopted.

He entered foster care at about six months old. He was placed with a kind foster family. When we met them I could tell they cared deeply for him. I wish I knew more about that time in his life, but I don't. It's sad, but I'd rather have the next 50 years than that one year.

We brought Mac home when he was 10 months old. It was 3 days before Christmas. We had his first Christmas, first steps, first birthday. I am so thankful God granted us that time!

It took 21 months to adopt him due to an unforeseen custody battle with the family he was removed from. But he's ours, 100%. That was 2.5 years ago. So hard to believe!

Now Mac is an amazing 5 year old. He is the kindest child you will ever meet. He often gives up his portion of treats or prizes so other people can have them. He is selfless to a fault (I often have to remind him that he deserves treats as well and to stop giving things away all the time). He's a charmer - all females love him from young to old. I think it's because he's just so inviting and open, people are drawn to him.

Mac is fiercely loyal to his family, especially his brother and sister. While I know he and SB fight all the time, they would defend each other to anyone for anything. And with Jay - he is smitten with that baby. Always hugging him and playing with him. I love to see him interact with his siblings.

We would never know this about him if we had not adopted him. In fact, I wonder if he would have been like this had he remained in the family he was born in to. I'm not trying to bash them, but they were not good people. They did not nurture him.

My son is amazing. He is a quality human being. He is smart, funny, giving, talented, bubbly, dedicated, athletic... And he is MY son. My son. Thank you, Lord, for this amazing boy. 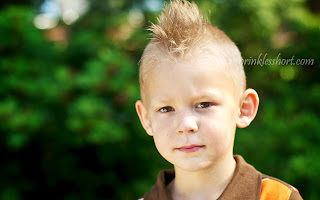 And he wouldn't be my son if it weren't for the gift of adoption.

Have you considered it?