Weaning of a different kind

I was a very strict weaner when my kids were small.

With Mac it was a little different. Since he came to us at 10 months old and had never had a solid food before, we delayed. He was 15 months old when we got him off the bottle and formula. But again, I was strict about it.

But then the allergies started. With Mac being allergic to dairy and soy, factored in with his inability to gain weight, he was put onto a high calorie milk substitute called Peptamen Junior.

Basically this junk smelled like vanilla & cotton candy flavored spoiled milk. It took months to get used to the smell, but Mac loved it. We began calling it Mac-Milk. His favorite thing in the world is Mac-Milk.

But now he's outgrown his allergies. He can have all the wonders of true dairy now. It's time for the Mac-Milk to go bye-bye.
But he loves it.
But it's time for it to go.
But it makes him happy.
But it stinks.

This week there were 6 cans left in a box and I decided we were not opening another box (let me tell you - we have...at least 6 BOXES of this stuff left - 24 cans to a box). Now, since I took this picture, we have used up one can and have opened another. So less than 5 cans left. 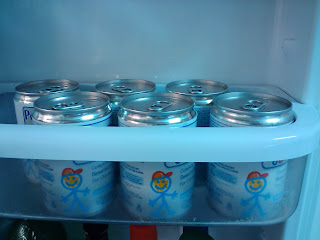 This has been the Mac-Milk shelf on our fridge for 2 years. It holds 8 cans which used to be about 2.5-3 days of Mac-Milk.

I'm so happy to be weaning him off of this stuff. But it's also a little sad. He's growing up. And while I'm so thrilled the allergy is gone, it means so is my baby.

So we had a little talk yesterday about the Mac-Milk. I showed him what was in the fridge and told him when those were gone there was no more Mac-Milk. He's a big boy now and doesn't need it. He seemed a little sad at no more, but I think he got it. And he's very excited about REAL Chocolate Milk.

And I'm also excited to get my fridge space back.