I was not a church go-er as a child. But when I was in high school, a boy invited me to his church. I went and enjoyed it. One evening a group of kids from church went to a  Christian concert at a local college. I couldn’t tell you who was playing then, and I can’t tell you now – but I can tell you that was the night I gave my heart to Jesus Christ. Thousands of people in an open arena were singing and calling out to God. I felt a tug at my heart, and I heard Jesus calling me, “Allison, put your trust me in. Let me into your heart.” And I did. I was 16 years old.

During college, I began dating Marshall. We had been friends for years, but it was college that brought us together. This boy was a Christian, and I knew that.  He came from a strong Christian family, and I longed for that strength in Christ.
Marshall and I were married in 2003. Our Pastor spoke of love. Of love for your spouse, and love for your God. I loved both. God had brought me my love, and Marshall had brought me so much closer to my God.

But soon God put an ache in my heart. I was ready for a family. Marshall and I had already agreed on children, and agreed that we would adopt a child as well. In early 2004 we started trying to get pregnant. One would think this was easy enough, but alas, things are not as easy as they seem. After a year of trying to conceive a child, I went to my doctor for advice. I took him months of charts and data. He didn’t look at any of them. He immediately prescribed a battery of tests for Marshall and I to undergo for infertility.

We refused the tests, and God gave us incredible peace. In the months that followed we felt God telling us to follow Him and to entrust our lives to Him, which we did wholeheartedly.

In September 2005 we experienced a very short-lived pregnancy. Before we even had time to be excited the baby was gone. I named her Maggie Joy - which means Pearl of Joy.

A month later we began the process to adopt. It was not a rash decision or a second choice - in fact, I had told Marshall I would not marry him unless he agreed to adopt regardless of biological children.
In late March 2006 we got a call about a girl expecting twins – a boy and a girl. I was excited. We finally said yes to this match after saying no to many others. I called the twins Simon and Simone (as placeholder names). I started to look up everything I could for twins. But about 2 weeks later we were told they had changed their minds. I wanted to be upset, but I had an incredibly peace about it.

God was at work again, because in April as we were getting ready for a trip to Las Vegas I discovered I was pregnant. The morning before we left I happened to a test and it was positive - we were shocked. God had answered prayers and worked a miracle. We put our adoption plans on hold.

My goal was to become a mother while I was 25 years old. SB arrived with 3 weeks to spare before my 26th birthday. Talk about the nick of time. Another funny thing… I prayed throughout my pregnancy for God to give us a “healthy, pink baby.” Well, God took me very literally when I asked for a pink baby. SB was born with a head full of red hair. And the doctors and nurses said she was the pinkest baby they had seen in ages. Very funny, Lord. But thank you!

When SB was about six months old, I kept seeing signs for adopting through foster care. It was a billboard of two large white eggs and two smaller speckled eggs. I saw it everywhere. I felt God telling me, “This is what I want you to do.”
“No, Lord,” I replied. “I can’t do that.”
“Yes you can, you need to adopt through foster care,” He said.
“What if they take my child away?” I implored.
The response, “Trust me.”
I do, Lord. I do.

On SB’s 2nd birthday in 2008 the social worker called. “You have been chosen to parent a baby boy,” she said. A few days later we met with the social workers and saw our son’s file and picture for the first time. We brought him home three days before Christmas 2008. 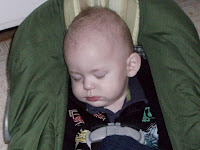 Our son, Mac, was ten months old when he came home. He was conceived in June 2007 (when we applied to adopt). He was born 4 weeks early in February 2008 (when we did our home study) and had recently been placed in foster care when we were approved that fall. God's timing is divine! And once again, God answered prayers. Marshall had prayed for a child younger than our daughter. He’s one day shy of being 14 months younger than her. I prayed for a child who had few complications and issues as a result of a detrimental home life/foster care situation. He was an average, healthy, normal little boy.

But along with answered prayers, God decided to test us. Three months after Mac came home, we found out that elderly relatives wanted him back with their family. They were suing the state for custody. We had to hire a lawyer and fight back. I cried out to God - why is this happening! But I'm sure you can guess the response I got. I was reminded of the argument I had with God when we were praying about going through foster cares - He had said to trust Him. It was hard, but I did my best.

I have never been through such heartache as I did in the time I thought each day could be the day I would lose my child. It took 18 months of legal battle and thousands of tears and dollars to save our son from the family he had been removed from as an infant. 21 months after we brought Mac home we finalized his adoption in September 2010. He was 2.5 years old. 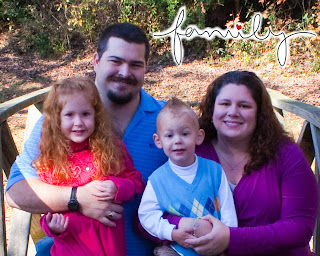 As we entered into 2011, Marshall and I were searching and asking God what he had planned next for our family. Separately we had gotten the feeling that our family was not yet complete, so we began looking into adoption again. We were praying about going through DSS again or adopting from Uganda - which had been laid on my heart.

In March I discovered something I thought to be impossible. I was pregnant again. While not part of our plan, we were thrilled. Marshall and I discussed named and started plans for moving the kids into a room together to open one up for the baby, whom I already felt was a boy. Until we went in for the first doctor's appointment where we were told things were not developing right. With testing we discovered that the baby had 3 sets of chromosomes and would have never developed. I wound up having a D&C because my body refused to let go.
We named that little one Tobin which means God is Good.

After that loss, Marshall and I took time to pray and seek God's will. I felt a desire to get back into adoption and Marshall agreed. But once again, God had another plan. Days before departing for a family vacation to Disney World in January 2012, I found out I was pregnant. Shocked and scared, I told Marshall and was cautiously optimistic. Would God take this one as well, or would we be able to hold him or her in our arms? I had to trust God completely.

Our second son, Jay, was born in September 2012 after having issues with bleeding. It turns out the placenta had a spot where it was deteriorating. It was scary. Believe me, trusting in God in that time was all I had. But we had a very healthy 11 pound baby. Yes - 11 pounds! He is such a joy. Truly you have never met a happier baby. He is the apple of everyone's eye. What a blessing that sweet boy is! 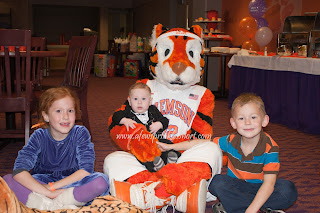 Life isn't always easy, I have to wait for God and trust in Him to write the story.
“Trust me,” He said.
“I still do, Lord, I still do.”