This week's MamaKat writing prompt was "Your life is being turned into a movie...who will play your cast of characters?"
I thought this was an excellent question, but I had to wonder why I wouldn't play myself. Then I remembered that I'm short and pudgy and probably not a great actress even though I pretend I am. And that I'm famous. And tall and thin.
But if someone out there wanted to make a movie of my life (anyone? I'd love to help write the screenplay!), these are the actors who would be in it.
Initially I wanted Julia Roberts circa 1995 to play me and Harrison Ford circa 1980 to play Marshall...
but I decided I better pick people in the current time era.

Starring as Allison: Zooey Deschanel
Why the fab Zooey? Because she's a little bit gorgeous and a lot quirky. Of course, she has dark hair and pale skin, so we're pretty much twins, right? Right? And man can she sing. Of course, the story of my life would be a musical!

My first thought for Marshall was the gorgeous TR Knight, but he's not tall enough. And the very yummy Taye Diggs is...well...black. So I kept thinking auditioning lead males.

As Marshall: Goran Visnjic (you know, the hot doc from ER)

I like Goran because not only is he a hunk, but he does both brooding and funny in his expressions. And my husband is both brooding and funny. And both are tall, tanned and have dark hair. And Goran can rock a 5 o'clock shadow as well as my man.
For Thing 1 & Thing 2 I had a harder time. I don't know of any kidlet actors out there, really, because Lindsay Lohan and Kiersten Dunst aren't kids any more...
For SB: Abigail Breslin

She's a good bit older than SB, but then again, what life-turned-movie isn't exaggerated a little, right? But she's young, very talented and hair the right hair.
(If her character grows up, I totally want Emma Stone to play her!)
And Mac? Well, we have all seen those grown up photos of the adorable Jonathan Lipnicki who now had rock hard abs...he's not a kid anymore either.
So I chose: Tate Berney 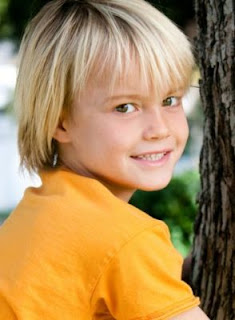 He played little Adam Chandler on my soap All My Children. A cute little boy with a killer smile like my little boy. I think it's a good fit.