The Real World is NOT What They Said

When I was in college, my professors kept telling me what the real world would be like. Competitive, hard work, always fighting for my place in the world.

I graduated with my degree in Communications (which is college-speak for "Congrats! You have no marketable skills without a higher degree.") and went out into the world. It was not what they said. At all. Here's how.

1. I was told the market would be competitive. I went to a local newspaper and to freelance for them. I was hired as a full-time reporter weeks later without even trying. No competition.

2. I thought I would *love* what I did. I thought I would write news stories that would change the world. After a few months of what seemed like nothing but county council meetings and chasing ambulances, I was beginning to hate the world of hard news. I did love the lifestyle pieces, but they were not as often as I wanted.

3. My professors sang my writing praises all the time. I thought surely my editors would do the same. Not so. I was publicly chastised for using quotes the publisher didn't like. Yay, reporting!

4. When I became a photographer, I thought work would fall into my lap and was shocked when it did not. I got business, but not much.

5. I was sorely disappointed to not be hired as a wedding photographer because Uncle Bob had a nice camera and offered to do photos for free. Nobody, in all my training, ever said I would be passed over for a loud, balding uncle/friend/cousin with a camera.

7. In my attempts to become an author, again, I was never told I would have to be my own marketer. I know how to write, not market myself. Honestly, I can market others easily enough, but trying to toot my own horn isn't that easy.

So there are a few things about the real world that took me by surprise. I guess I shouldn't have been surprised, but I was nonetheless.
By Allison at 10:12 PM

I have goals in life. I mean, don't we all? But I have lofty goals. I have many goals I haven't reached and I've been 29 for a few years now! I'm not getting any younger! (Or older, if I have my way.)

So I thought I would share some of my goals with you. Accountability and all, right? And I realized I can't achieve my goals if I don't try. I will fail if I don't even make the effort.

Here are my life goals. All of them. Some I have achieved, and they are crossed off. But way too many are sitting idle without my doing much about it. Ready? Here we go.

So these are my goals. Some are a little more lofty than others. Some are fairly simplistic.  Many I can't accomplish at this point yet (no arranged marriages for the kiddos, thank you). But many I can. I can attend a writer's conference. I can work on becoming a DJ or public speaker. And of course I can always pray more.

Help me stay accountable, okay? Thanks!

A very dear friend of mine shared this with me: 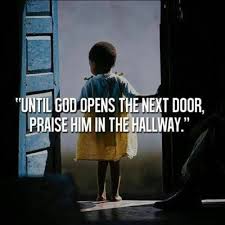 I'm doing my best to Praise God in the hallway while I'm waiting for that door. I told my friend that the hallway was starting to get stale and boring. But I'm still praising!

Looking for a Job

I'm currently looking for a job. I know, it's been awhile. I've been a stay at home mom since I was pregnant with SB. But it's time. I'm ready to rejoin the work force that I haven't seen in a LONG TIME.

What about those novels I've written? I'm glad you asked. Three novels written. A fourth undergoing major surgery right now. But they don't pay the bills, and until I can afford either self-publishing or a writer's conference, my novels will be sitting in anticipation!

I've put in several applications for photography jobs and several for writing as well. I love being creative! I'm praying that the right job will come along.

Getting a job is scary, too, because it means not being home with the baby and not waiting for the kids to get off the bus! I've never had a job-job since being a mother. I'm apprehensive as you can well imagine. But I think it's time.

Part of trying to find an agent and get published it sending out query letters. I thought surely I was the only person who loathed trying to sell yourself and describe your 75,000-word piece in two paragraphs. then I learned all writers hate query letters. At least I'm not alone.

I send queries to two agents a few weeks ago. I got a rejection letter today from one of them.

Oddly enough, I smiled. A rejection still means I put myself out there. I still tried. And I'll never make it as an author if I don't try, right?

I hope the other query I send gets a different kind of letter back. That agent required a LOT more in a query than just the basic letter. And more detail hopefully = a better chance of getting picked up.

One day that rejection will be acceptance. And it will be worth all the rejections letters in the world!
By Allison at 3:19 PM